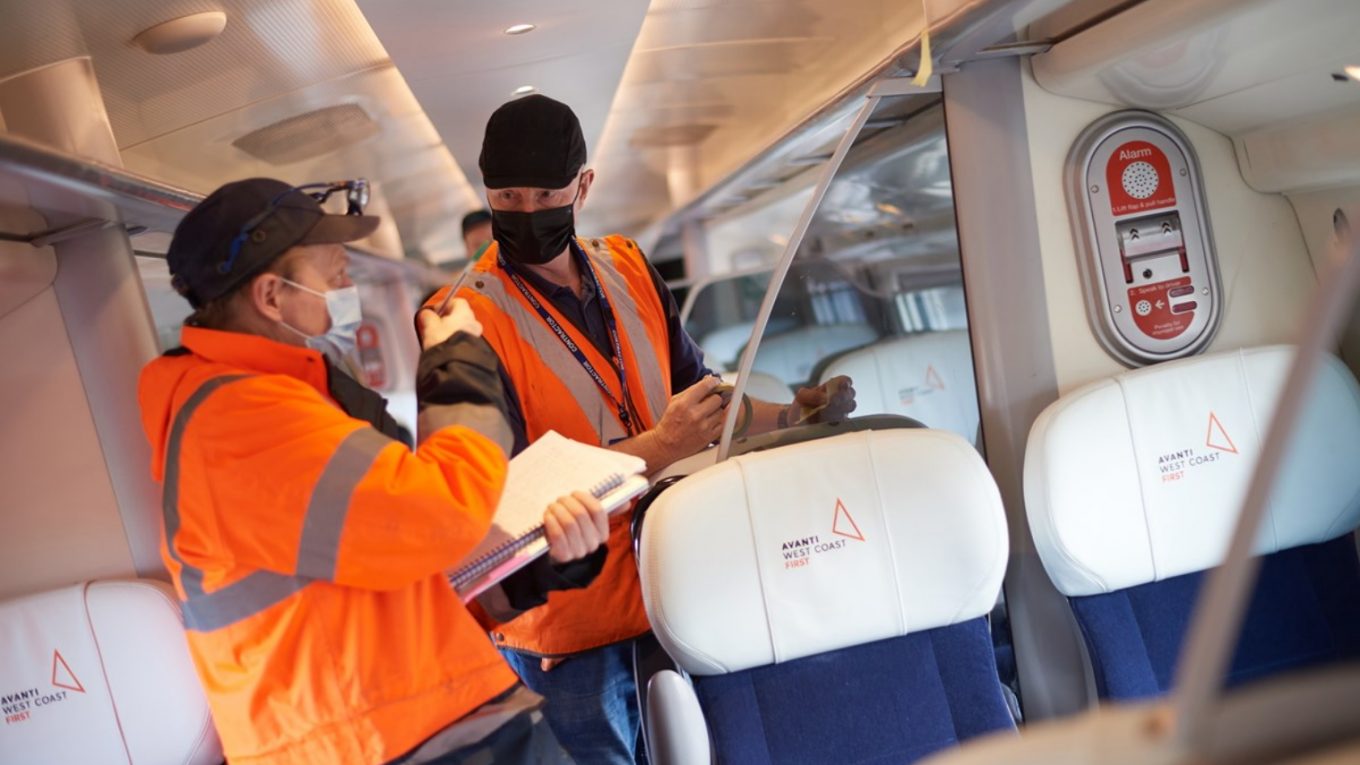 Avanti West Coast’s first refurbished Pendolino has entered service after being transformed as part of ‘the UK’s biggest train upgrade’. The tilting, electric powered Pendolinos (Class 390s) are one of the most iconic train fleets in the UK, transforming train travel between some of Britain’s biggest cities when introduced nearly two decades ago in July 2002 by Virgin Trains.

Customers onboard Monday 25th April’s 05:05 Manchester Piccadilly to London service were the first to travel on the upgraded Pendolino, but I’m not much of a morning person so I took a quick trip on the 20:55 Stockport to Manchester service that evening instead.

Perhaps the most notable change are the seats, which appear to be the same as on Lumo’s class 803 trains but without the reading light on the back. The blue and mint green colour scheme, with a flash of orange across the headrest, match Avanti’s brand colours perfectly. And comfort-wise, they’re fine – not the best train seat I’ve ever sat in, but far from the worst. Standard Premium and First Class seats have also been updated and look great.

Plug sockets for charging devices are now available at every seat, and I’m really impressed with their placement. On many fleets, the plugs for airline-style seats are either in the wall of the train (and therefore not accessible to the person in the aisle seat), or they’re under the seat you’re sat in (so you can’t see what you’re doing when plugging in – really frustrating!).

Avanti have got it right though – the plug sockets are located in the lower middle of the seat in front of you. At table seats, they’re now on top of the table instead of underneath it, and in Standard Premium and First Class the tables even have wireless charging built in – neat!

Other features include the introduction of a new onboard shop (which has recycling bins and a water bottle filling station – great for sustainability!), improved LED lighting, new interior carpets, vastly improved passenger information screens, and refurbished toilets. It’s also worth pointing out that this refurbishment program includes the conversion of one First Class carriage on each of the 35 eleven-carriage Pendolinos to provide more than 2,000 extra Standard Class seats. Extra luggage racks will also be installed.

The main purpose of my ride on the refurbished train was to check out the new accessibility features, and I wasn’t disappointed. To make the wheelchair space clearer, and deter people from placing their luggage within it, the carpet now features a prominent, yellow wheelchair symbol.

The first of two other new features I noticed was that the seat numbers are now labelled closer to the aisle on the side of the seats, as well as on the train wall, making them easier to see for customer’s with visual impairments. The new stickers also include braille dots, making the seat numbers accessible to braille readers for the first time.

Secondly, I was also pleased to see that the information screens on the exterior of the train doors are now much easier to read, as these are now bright white LEDs as opposed to the dim green dot matrix displays pre-refurb.

Overall, I think the refurbishment is great. Everything has clearly been well considered, and feedback sought from disabled customers and other stakeholders. I hope its not too long until I can take a longer journey on one of the refurbished Pendolino trains!